Neeti Palta is a famous stand-up comedian in India. She is famous for appearing in Amazon Prime's comedy web TV series "Almost Sanskari" (2019). Neeti has been a part of the comedy scene since it's inception in India and enjoys the reputation of being "that cheeky girl"! With a writing background in advertising and TV she draws influences from real life experiences, humans and our Indian innateness. Her comedy has a worldwide appeal across borders, cultures and different age groups. You can now Book Neeti Patla for any kind of events to come and laugh at the complex inner workings of a comedian's mind as she keeps on sharing about life whatever happens to her.

In India, we have a grand league of stand-up comedians that can be hired and booked for events and shows. In this stand-up comedy era, Women also tend to judge themselves a lot more than men by all. So they are not afraid of performing on stage to be judged by a bunch of strangers on a regular basis! Then there's a question of pre-set notions. 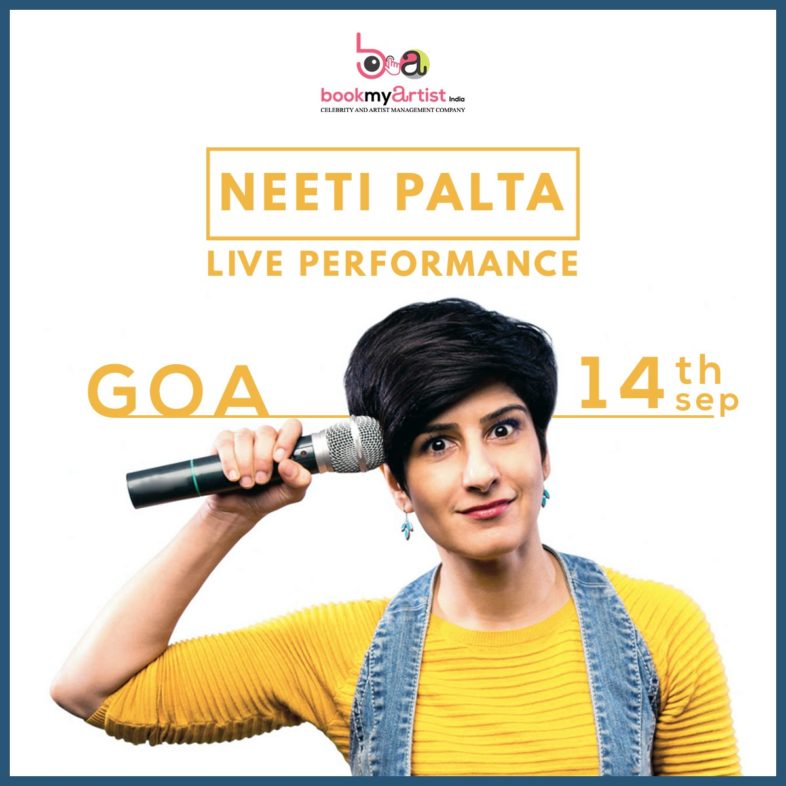 Hire Neeti Palta for your event

Neeti Patla was born on 11th February 1980 in Agra, UP India. Being part of the English comedy scene since its initiation in India, she is a home-grown talent who loves to have the reputation of being "that cheeky girl". Furthermore talking about her educational qualification, she has done her schooling from Kendriya Vidyalaya, Colaba (Mumbai) and the Army Public School (New Delhi). Similarly, she completed her graduation from Delhi University and a Journalism Degree from Symbiosis Institute of Media and Communication (Pune)

Her father and mother are named as Mr. Anand Prakash and Swaran respectively. Her family values are little high as being from an army family often shifted to different cities in India.

Getting influenced from real life experiences, humans and our innate Indian-ness, Neeti's comedy has an honest view and clean account of her experiences and feelings. No one can put it better than her when she conveys her comedy beyond a point "your bullshit quotient" goes up and you need to find something that doesn't just give you money but also makes you happy. Brought up in a typical fauji household, Neeti grew up all over India and was also exposed to different cultures from the North, South, East, and West. She started doing stand-up as a hobby and was immensely surprised when people started offering me money to do it! Strangely enough, it was her mother who pushed her into advertising.

At An earlier stage, Neeti started her career with the advertisement company for almost 12 years. Neeti Palta also did a job as TV (Scriptwriter): Galli Galli Sim Sim (2006) the Adaptation of the American children's TV series Sesame Street which was aired on DD National. Likewise in November 2012, Neeti participated and won the RAW comedy competition which was sponsored by the OZ fest. And then she started her YouTube channel (Stand-Up Comedian): Neeti Palta on Body Image (2013).

All these achievements provide Neeti an immense pleasure and success in her stand-up comedy field. She has also become the First Indian to perform in The Melbourne Comedy Festival. The Bollywood Movie also has a script written by her. Her performances in some of the famous web series are well recommended. She is mainly known for her Sanskari TV special.

She was ranked #1 on the CNN IBN's list of 'Top 20 Indian stand-up comedians' to watch out for in 2014'. Neeti has performed for an audience of 30-plus nations at the invitation of the former Under Secretary General of the UN, Dr Shashi Tharoor. Besides, she performed at the Femina Miss India 2014 – Delhi chapter, and also on Prime Rising Stars of Comedy at NDTV Profit. She was also the recipient of the 'Devi' award instituted by The New Indian Express Group, to recognize and honor 20 exceptional Indian women who display dynamism and innovation in their work.

With fewer female comics in the field, very few are likely to get succeed. That being said, it is also a question of biases and acceptability. Talking about India, ours is still a conservative society with clearly defined (at least in their heads!) gender roles and some people But the response Neeti Patla have received so far across the country has surprised everyone.

Do you love watching stand-up comedy? If so, then we've got some good news for you to Hire Neeti Patla - one of India's highest rated and hilariously observational witty comedians, she is all set to get you furious like crazy as she delivers her comedy in a tongue -in cheek-way with a bag full of humor and social massages too!