Event planners hired a stand-up comedian for several corporate comedy gigs. As a corporate entertainer, they seek to represent the company's interest in the best possible way. Corporate comedy is a specialized field that involves consulting with clients. Jeeveshu Ahluwalia would be the first name, when it comes to stand-up comedy for corporate events. You can now easily Book Jeevenshu Ahluwalia to get the feel of the real corporate comedy. His humour and iconic comic style can be noticed through his one-liners, punches & quirky jokes. His peculiar style of comedy is most inspired by everyday observations in the corporate world. 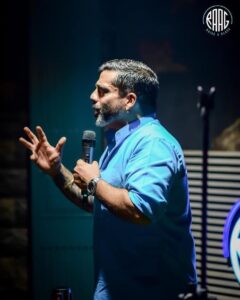 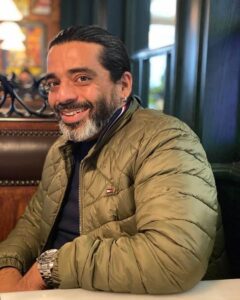 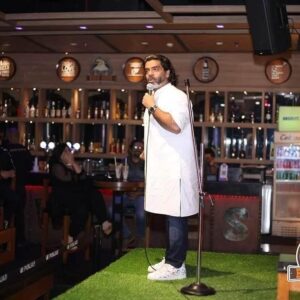 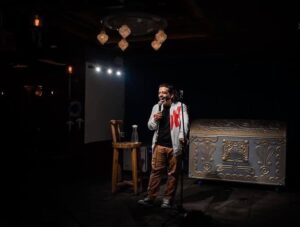 Jeeveshu Ahluwalia is among the popular Indian Stand-up Comedian, presentator, YouTube creator and an actor who took birth on 22 September 1976 in Delhi. He did his schooling from "Sahoday School, Delhi" and completed his graduation from Bachelor of Commerce in Deshbandhu College (DU). His sense of comedy style is truly inspired from the everyday conversation between people, quirky monologues, peculiar situations & some eccentric friends. Most of his live shows' audiences want to be in touch with him and want to attend his live shows and corporate events.

Prior to turning into an entertainer, he did some random temp jobs like entryway promoting, introducing PVR films and furthermore in Pizza Hut. He was the chief of a BPO organization and was acquiring something really great, yet he quit his place of employment to seek after his profession in parody. He was likewise found in the Make My Trip notice, close by Alia Bhatt and Ranveer Singh.

His style of comedy sways between the classic life of a fat guy and his failed attempts of pleasing his over-optimistic mother; a mother who wants her son to do just one thing first and foremost – to get married! Jeeveshu's witty and spontaneous jokes are like wind who likes catching up gossips with his mom and stalking his ex-girlfriends on social websites. The comedy gigs need personalized material designed for the target audience. Respect is also an integral component of corporate comedy. No one may be embarrassed or made the butt of a joke.

Born and brought up in a Punjabi family, later on, he quit his 9 AM to 5 PM job in order to enter into stand-up comedy. It took him three years to become famous after doing several shows and giving lectures in corporate events/meetings. Some of his corporate clients are Google, Microsoft, GENPACT, Yamaha, Canon, Snapdeal, Cognizant, The Times of India, JW Marriott Hotels & Resorts, and Starbucks Coffee etc.

Jeeveshu Ahluwalia is one of the top TEDx speakers who can also be seen on TV in commercials for Havmor, MakeMyTrip, Loan Junction, Comedy Central India, Phillips, Apollo Hospitals, ICICI Prudential, Grofers and more. His TV Debut was contracted with Zee TV channel in the comedy show "Gangs of Haseepur". He has been the winner of "Radio Mirchi Comedy Ka King 2014' and his stand-up videos and comedy sketches have been featured as viral videos on YouTube reaching over 30 Million Views.

He additionally appears regularly on NDTV Prime for 'The Rising Stars of Comedy'. Besides, he has performed at numerous events in auditoriums, clubs, colleges and corporate setups, throughout the country. Jeeveshu was also among the top 10 candidates for Comedy Circus Ke Ajoobe on Sony TV. The comedian made his Bollywood debut with the Ranbir Kapoor and Deepika Padukone-starrer Tamasha.. He has spread his comedy persona by performing over 2000 shows across different genres which has taken him to every corner of India and other countries such as Australia, Bahrain, Singapore, Dubai, Doha, Thailand, Philippines, China, Spain, Italy and Malaysia (who doesn't love traveling for free!). He made his Bollywood debut with "Tamasha" starring Ranbir Kapoor and Deepika Padukone directed by Imitaz Ali and followed up with his stellar performance in "Happy Phir Bhag Jayegi" Directed by Muddassar Aziz.

YouTube Creator - Jeeveshu Ahluwalia runs their YouTube channel, Jeeveshu Ahluwalia and works with number of brands to promote their products to their Youtube channel's subscribers by which he has saved from many disasters, apart from making sell-out venues laugh till their faces hurt drop into something different and watch the story unfold in this brand new comedy sprawl by none other than the man himself, untamed and uncensored, Jeeveshu Ahluwalia!

BookmyartistIndia is again back to tickle your funny bone. And if you are looking to Hire Jeeveshu Ahluwalia for a commercial opportunity or to get in touch with him directly so you can reach out to us anytime for performance, guest appearance or fashion show. So far Jeeveshu Ahluwalia has been working in the Indian and Bollywood entertainment industries and his artwork has been released in English and Hindi language podcasts and movies. Jeeveshu Ahluwalia is an Indian stand-up entertainer, who calls himself a "Laughterpreneur".